I caught a discussion on BBC Breakfast yesterday about the price of show tickets. Never mind the second mortgage needed to see the Monty Python reunion, it was guest John Robb, the writer, journalist and musician, who held my attention. Here's a man in his early fifties, with a distinctly severe haircut,  in a jacket just as sharp, open neck black shirt and big-buckled creepers... and he looks great. You can see he's getting older (as we all are) - he's more lined with a heavier brow and a little rough around the edges.  That's fine, it suits him. 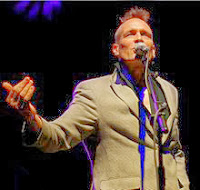 I don't subscribe to the idea of being an old punk; those days are over and, the way I see it, they were meant to be short-lived.  Can't see the point in trying to look exactly the same as I did decades ago - apart from anything else it seems to lack imagination. However, I love to see someone getting older without completely losing their edge, and I reckon John's doing that.

It's about how you age, isn't it?  It inevitably brings more creases, but that doesn't mean you stop ironing them out of your clothes. You don't have to start wearing shapeless trousers and beige anoraks, unless you really want to, of course. Not every man could (or would like to) carry off the John Robb look, I'm sure, but I'm so glad someone can!

And, personally, I love to see a few age lines on a man's face.