Ben had dark curly hair, big brown eyes and a cheeky smile which accentuated the dimples in his cheeks.   Even though we were only six he had something about him that made me feel excited.  I looked forward to seeing Ben at school every day -  so much so that it even helped me overcome my fear of Michael, the infamous class bully, who was best known for being good at kicking shins and flushing gloves down toilets.

One Spring morning Mrs Marychurch announced that she was going to take the class for a nature walk.  We had to line up by the door in pairs.  “Right now, children, join up: boy girl, boy girl…”   Some of the boys looked distinctly unsure about this while the girls giggled, but we soon fell, rather chaotically, into couples.  Somehow, magically, I ended up with Ben.  “Now hold hands with your partner, everyone, and don’t let go,” our kind, maternal teacher instructed.  Ohhh!  I clung tightly to Ben’s palm, which felt warm and nice, and I knew I wouldn’t be letting go in a hurry.

Off we went on our walk, a Crocodile of six-year-olds, out of the school grounds with its flat-roofed 1960s classroom blocks, across the road and up to the top of the wide tree-lined path which led between a cricket field and a meadow of Friesian cattle.  There at the summit Mrs Marychurch pointed out an oak tree and some cow parsley.  Then she let us all run to the bottom with the breeze in our hair, our grey skirts and shorts flapping, and Ben and I raced down that hill, laughing, our hands still tightly clasped.  We kept on going, further and further down the path, exhilarated.  Of course we were on strict instructions to return the second Mrs Marychurch summoned us back.  “Oh I think she’s calling…” Ben said anxiously as we stopped to catch our breath, Mrs Marychurch now just small and slightly blurred some yards behind us.   “No she isn’t!” I insisted.  My companion seemed less certain and urged me to return with him but I was adamant.  So we turned our backs on her distant figure and carried on.  And thus, at the tender age of six, I got my favourite boy into trouble.  When it finally dawned on us that the rest of the class had all joined our teacher and we were the only ones who hadn’t, our sheepish return was met with a very stern telling-off.  “I told you she was calling,” whispered Ben crossly after we’d been shown up horribly in front of our classmates. I was as mortified as a lovestruck six-year-old could be, which is to say: very…   In spite of trying to make it up to him with presents of Love Heart sweets (‘Be mine’ and ‘Will you’), that was the end of Ben and me. 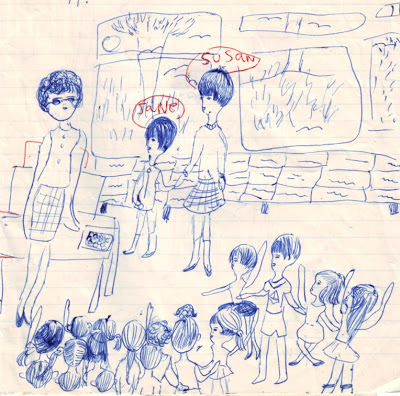 There weren’t many other boys in my class to fall for over the following years.  I became good mates with Ian, Iain, and the two Andrews, but that was because they weren’t much like the other boys and I wasn’t much like the other girls.  We all liked nerdy activities like drawing, reading, collecting little rubber animals and writing stories, so playing together was comfortable and easy.  I just didn’t ‘fancy’ any of them.  Mind you I didn’t fancy Christopher either but that didn’t stop me inadvertently leading him on one time.  As we spilled out of the classroom for lunch that day the not-very-bright boy with the thick-lensed spectacles and rodent teeth started touting for girls to play Kiss Chase with him.  All his favourite girls - Alison, Claire, Nicola and Ruth - were quick to say “No”.  I, stupidly (oh, so stupidly), felt sorry for him.  I don’t know why but I came out with a classic line which I was soon to regret.  “No I don’t want to play, but that doesn’t mean I don’t like you,” I said, as flirtatiously as a nine-year-old could, even though I didn’t like him.  Oh, why did I say that, why?

I went hungry that lunchtime.  Instead of eating I spent the entire hour being pursued by Christopher.  He chased me up and down the long playing field, in out and out of the line of willow trees, round and round the Pudding Stone and across the hopskotch squares on the tarmac.  I tried to hide under the coats hanging up in the cloakroom and behind the floor-length orange curtains in the Assembly Hall.  We played cat and mouse until I got that sandpapery feeling across my chest and a throbbing in my forehead, but my determined hunter wouldn’t give up.  I longed for lunchtime to be over. Eventually the boy cornered me by the rabbit hutch, pressed me up against it and pushed his mouth hard against mine.  I struggled, but to no avail - it was only the ringing of the school bell at the end of the lunch break that finally freed me from his clumsy grasp and his horrible wet lips.  If only it had rung sooner.  Flopsy the rabbit was not the only one to feel traumatised that day.

But I recovered from that and in the last year of Juniors my dream boy was Nicky.  All the girls loved Nicky and he was way out of my league.  He had lovely blue eyes and was supremely self-assured.  I didn’t expect my admiration to be reciprocated because I was neither pretty nor confident, and I'd never really spoken to him before, but when I was seated next to him in the final term I realised that I could sometimes make him laugh.  I started to learn that a bit of wordplay or a corny gag could go a long way.  Nicky actually appeared to like it when I tried out the “Do you know Theresa Green?”  joke on him ("what? - you don't know trees are green?") and it seemed I went up a few points in his estimation.  Enough points in fact to warrant me a place in his ‘Top 5 Girls’ list which he updated weekly.  I made it to Number 3 and, seeing as Number 1 was Big Karen who was already wearing - and noticeably filling - a bra, that was quite an accolade. (Like several of the other girls in my year I just had two small bumps under my blouse which embarrassed me greatly.) I don’t remember who Number 2 was.

I left primary school rejected by Ben and unwillingly kissed by Christopher but with a small, sweet confidence boost from appearing on heart-throb Nicky’s special list. It’s a shame really that I was then sent to an all girls’ school and boys became something of an alien species.  Or maybe it was just as well.
Posted by C at 13:02