At an age when my friends and I should have been enjoying the most hedonistic time of our lives, there was something dark and ominous looming over us like a monstrous headmaster ready to dish out discipline at the merest hint of any mischief: the threat of nuclear war. 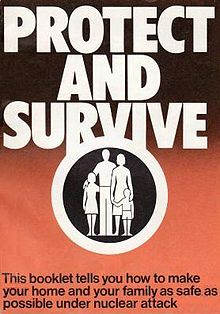 For me - and maybe for you too?  - the early '80s were schizophrenic in the extreme.  On the one hand there were 'Protect and Survive'﻿ pamphlets dropping through our letterboxes and, a little later, visions of a post nuclear apocalypse would be beamed into our living rooms via programmes like 'Threads'.

Even the children’s author and illustrator Raymond Briggs, best known for his wonderful books ‘The Snowman’ and ‘Fungus the Bogeyman’, stepped into this terrifying territory and haunted us with ‘When The Wind Blows’.   And ‘Only Fools And Horses’ parodied our deepest fears of imminent nuclear conflict with an episode entitled ‘The Russians Are Coming’ in which the hapless Trotters build a fallout shelter at the top of a tower block.  This was not so far from reality – anyone could buy DIY shelter kits through the Sunday supplements, which carried adverts for them as if getting one was on a par with purchasing a new shed.   With one of these safe havens in your back garden you could relax in the knowledge that when World War III kicked off (which it was definitely going to at any moment) you’d be protected against radiation by a few layers of lead, dirt and concrete and some strategically placed cushions.

On the other hand - perhaps as a direct response to the above - there were a lot of bright  and creative things going on behind the scenes.  However, the mainstream took colourful frivolity to an extreme, and seemed dominated by a culture (if you can call it that) of bubble perms and padded shoulders.   Frothy bands like Bucks Fizz (pun intended) topped the charts – their name, their look and their songs all summed up this strange, frilly party atmosphere.  They may as well have been singing, “Let’s all fiddle while Rome burns!”  On the surface it was all primary colourrs and lipgloss, and I can’t blame anyone for wanting that escapism.  If I’d been into plastic pop and not into punk – or at least the ‘anarcho’ element which one area of it had evolved into -  maybe I could have remained ostrich-like too, and emerged from the sand a few years later, blinking incredulously while asking, “Did I miss anything important?”

It wasn’t just about nuclear war.  There were dozens of other political issues to worry about and to rail against.  (Life was ever thus.)   For a short time I was right in the thick of it, immersed in a scene in which fanzine writers interviewed bands less about their musical influences and more about their stance on fascism and veganism.  Record sleeve artwork no longer exposed us merely to horrific fashion crimes, but instead to the horrors of crimes against animals and the inhabitants of third world countries.  Although… speaking of fashion, the faded black shapeless uniform of protagonists and followers did suggest an almost criminal lack of imagination. (With the exception of Rubella Ballet, who brought a much needed splash of dayglo to those murky days.)


Around ’81/’82, when I was most involved with this particular musical movement, I was at art college and, not surprisingly, many of my illustrations reflected the burning issues.  My portfolio at the time included collages of mushroom clouds, strange drawings of women bound by bandages and barbed wire, and a lot of black and red.  I was even commissioned to do a picture of balaclava-wearing activists carrying puppies and guinea pigs for an Animal Liberation Front flyer.  One of my favourite artists of the time was Sue Coe, whose uncompromising and often brutal, bloody imagery made my spine tingle.

Of course, I still had some fun; skiving off college and travelling halfway round the country in the back of a hired Sherpa Van with my boyfriend’s anarcho punk band was not without its lighter moments.  There were nice people around and good gigs and sometimes a very genuine sense of connection, especially in the face of this cold-hearted world we were kicking against.  And the causes were very real; I cared deeply about both human and animal rights, the divisive effects of the Thatcher government, the miners’ strike, police oppression, poverty, sexism, racism, etc.   It’s easy to feel downhearted about the notion that we didn’t make any difference – but in a small way I think we did, and maybe I’ll write more about that another day.

Meanwhile, it seems strange now to think that I actually spent some time in my late teens giving serious consideration to what I’d do when the four minute warning was sounded (eat chocolate? - snog the first person I saw? - slash my wrists?) whilst at the same time Top Of The Pops gave us fluffy pink-clad dancers flashing vacuous grins to four minute pop songs.


And here’s a song which, to me, absolutely sums up the feeling of the time with both its dramatic arrangement and poignant lyrics: