Hey Joe, where you goin’ with that book in your hand?

I worked part-time in my local library for a while, to earn a few extra £s so that I could elevate myself a little from my ‘artist starving in a garret’ position.  (I’m now more of an ‘illustrator who gets a bit peckish from time to time in a two-up-two-down’, but that doesn’t have quite the same ring to it.)   Ironically it was before I started wearing reading glasses and after I’d had a short haircut, so I missed out on the chance to undo the clasp on a French twist and shake my golden tresses free as a tall, handsome stranger whips off my specs for me, exclaiming as he reveals my naked eyes, “Why, Miss Librarian! You’re beautiful….”   (Well, I can dream.  I don’t think the advances made to me in reality by a randy octogenarian count somehow…)  Anyway, before I go any further into fantasy librarian mode maybe I’d better cool down and stay on my intended topic.  …So, yes, thinking about my library days I was just wondering what it would have been like if Joe Orton had been around to tamper with the book covers…  Would I have been dismayed and outraged - or secretly amused and impressed?!  It does have something of a punk feel to it – my mind spins round to pranks and artistic actions played out by characters at the onset of the punk movement – for example, Jamie Reed producing the iconic Situationist-inspired image of the Queen with the safety pin in her lip.
Joe Orton, the young English playwright, was at the centre of much controversy during his short lifetime (1933 – 1967).  His black comedies drew much attention and were often considered outrageous at the time, but before he gained great interest for his writing he and his lover, Kenneth Halliwell, had also attracted attention for a rather convoluted prank that actually ended up with them being sentenced to six months in prison.  The punishment sounds so extreme now in consideration of the crime, but Orton felt this could also be due to the fact they were (to use his word) ‘queers’.  This was 1962, after all, when homosexuality was still illegal.  I find it hard to get my head round that, but it wasn’t to become legalised until 1967.
Orton and Halliwell’s prank involved stealing books from their local library and altering the covers by sticking on unrelated cut out pictures, lines of type containing irrelevancies and obscenities. They re-wrote some of the text on the insides of the dust jackets, and removed many illustration plates too which they used to decorate the walls of their bedsit (I love that idea!  It could be like one room-sized collage.)  They then returned the newly defaced books surreptitiously and, where possible, waited for people to find them so that they could observe their baffled reactions.  I can’t help but admire them for it…!  In recent decades libraries in Britain have worked hard to become forward-thinking, open, modern places where all members of the community are welcome – gone are the days of the uptight, tight lipped, brown tweed clad librarian in horn-rimmed specs “shushing” you for breathing too loudly…(there’s nothing like a good stereotype…)  but in Orton’s era it seemed that was perhaps the case.  He and Halliwell were appalled at the choice of books on the shelves of Essex Road Library and the adulteration and theft of some of those they did stock was an audacious statement of their dissatisfaction.
In homage to this imaginative prank, I present my own version, purely for my own amusement (and hopefully yours too…) 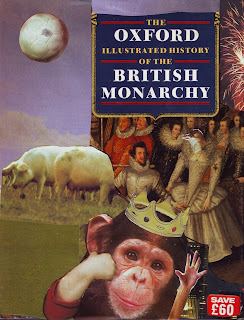 Artwork by C / Sun Dried Sparrows
You can see a gallery of the actual book covers on the excellent Joe Orton Online website here: http://www.joeorton.org/Pages/Joe_Orton_Gallery13.html
(with thanks to Alison)

And a great little TV clip of an interview with Joe on this very subject can also be found on the superb blog, Anorak Thing:
http://anorakthing.blogspot.com/2011/04/joe-orton.html
(with thanks to wilthomer)


"With madness, as with vomit, it's the passerby who receives the inconvenience."
Joe Orton