The cover art of the art cover

There’s a series of paintings by Magritte which I love: L’empire de Lumières (Empire of Light).   I love them because they’re impossible. 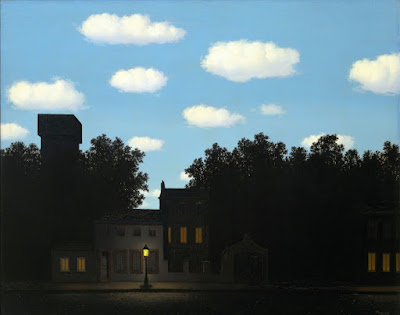 The sky tells you it’s daytime, but everything else shows it’s night.  At first it looks like some kind of twilight scene, but the sky is full of light and the light should go somewhere - it doesn't.  Instead the trees and ground are in darkness, the buildings illuminated only by a streetlamp.  Magritte’s art is full of the unexpected, of little visual tricks and playful combinations that don’t go together naturally.   I had no idea that I’d ever be saying the same thing about Jackson Browne.

But here it is – the cover art to Jackson’s album ‘Late For The Sky’. 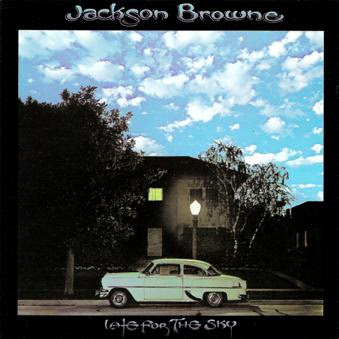 Thanks to it being featured at  Rol’s very fine blog My Top Ten,  it was the first time I've taken notice of the sleeve which I must’ve flicked past in record shop racks many times before now.  But the picture is brilliantly inspired by the Magritte series, this time a photographic sky of vivid daytime blue with bright white clouds which could only be lit by strong sunshine so, like the painting,  everything else should be too - but no.  Clever, innit?  I still prefer Magritte, though.

Anyway it got me thinking… about art and album covers and how there are others that also take their influence from well-known paintings.  One of them sprang to mind straight away. 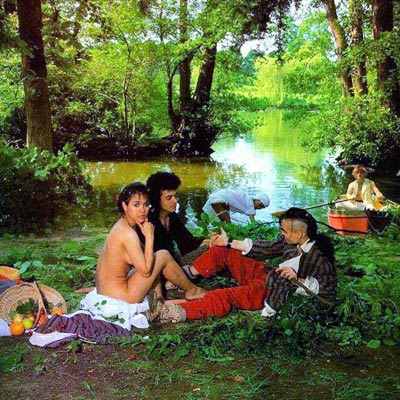 It's still controversial because we're aware that Annabella Lwin was only 15 at the time of the photo shoot.   When asked in later years if she realised how 'shocking' the image was she replied that she didn't and that the difficult part for her was really just the act of sitting there naked in the middle of nowhere on a cold early morning with her clothed male band mates. The original Manet painting had also been thought of as offensive (though for different reasons) and was rejected by the official art exhibition (the Salon) in France at the time of its creation in the 1860s.  It wasn't the nudity itself that was the problem (hardly unusual in art!) but something about the context. 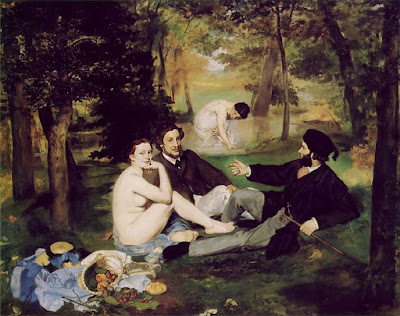 
However this wasn't the first time a painting of nude women in the outdoors with clothed men had been exhibited in France so it seems a bit hypocritical.  Manet was influenced by this one on display in the Louvre, painted over 300 years earlier. 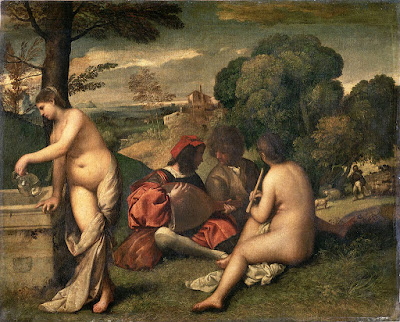 It's not known whether this is by Giorgione or Titian
Fiestra Campestre,  1510

At Bow Wow Wow's peak anyone buying their records was already familiar with seeing photos of Annabella without many clothes on, and I don't remember this cover seeming as outrageous in 1981 as it probably would be now, although it still ruffled feathers - just as Malcolm McLaren intended it to.  The publicity worked - the album quickly made it to No. 1 in the charts - but a less happy outcome of that cover was a rift it caused between Annabella and her mum.

But I know I readily accepted it - as art, I suppose - at the time of its release, when I was just 17 myself.  I might have done the same as Annabella at 15 and I doubt I'd have ever thought of it as anything dark, especially with band mates - more just embarrassing, but also rebellious.  Perhaps the fact that it was an obvious pastiche of a painting made all the difference?  Also I can't help thinking about how the photo shoot must have felt in real terms, all waiting around for the right light and getting the technical details in order whilst hoping your, erm, goose pimples don't show, a bit like life modelling with a broken fan heater.

I've been looking at other album covers inspired by famous paintings too so I've some lined up for future posts (oh, another series!)  As in the thoroughly enjoyable one over at Charity Chic Music where we get to weigh up a wide selection of cover versions with their originals (the outcome for Bob Dylan was victorious but we've yet find how it’s all going to pan out for Bruce Springsteen) I found myself wanting to rate which one I preferred.  Most of the time it's the original painting but I'd have to give my points to Bow Wow Wow for this one - the lushness of the setting and Annabella's typically defiant expression take me right back to this great song (which I can't embed because Blogger won't let me - censorship all over again? - so here's a youtube link)

And here's that fantastic clip of Annabella sticking it to the extremely condescending BA Robertson.