A view to a kill 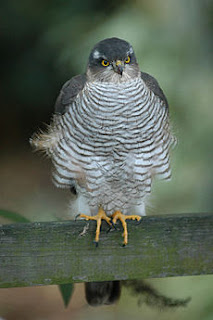 As far as excuses go, I don’t think “The sparrowhawk ate my woodpigeon” is going to wash when I explain why I’m a bit behind on my work – but it’s what held me up yesterday.  I’d come in from my Shedio (shed/studio, out in the garden) to make a cuppa, got sidetracked checking emails, and when I went back to the kitchen to get my tea I witnessed some very gruesome bird-on-bird action through the window.

I’m glad I missed the initial attack - must’ve been pretty harrowing.  The woodpigeon is a big old bird and weighs about half as much again as a female sparrowhawk.  However, with her speed and stealth, the sparrowhawk had ambushed it and was already plucking out its feathers whilst pinning it to the ground, ready to eat.  Sadly, it was probably still alive.

Once the sparrowhawk started tucking in to its prey I realised I too was ambushed in a way –  trapped inside the house because going back to work in the Shedio would mean disturbing her and I didn’t want to.   My reasons being: a) until most of it had been eaten, the woodpigeon would be too big for the sparrowhawk to carry away in her claws to finish elsewhere so its death would’ve been futile and, frankly, what a waste of fresh meat  and, b) I didn’t really want the job of clearing up the crime scene.

So I decided to wait until the sparrowhawk had eaten the whole bloody thing even though it would take hours.

Anyway, next time I glanced out the window the hawk was on the fence, empty-footed, cleaning her talons before  flying off.  Finally (but too late to get on with any more work, honest)  I could go outside.  It looked like there had been a small explosion in a feather duvet shop but, apart from that,no sign of any other pigeon remains.

When I looked out this morning, though, the sparrowhawk was there again.  And so was what was left of the woodpigeon, having its bones picked clean by the look of it.  I was surprised – seems the hawk must have left it hidden somewhere overnight and returned to retrieve it and finish it off today; I didn’t know they did that.

The sparrowhawk and I both ate our breakfasts and by the time I’d finished so had she.  So I went outside to survey the scene, and this time I found a foot.  A whole woodpigeon foot, that was all. But be thankful I've spared you a photo.

Now, don’t be too put off, but I have a macabre fascination with this kind of thing and don’t find it gruesome at all.  Maybe because it’s all part of the way nature works.  Perhaps also because I when I was growing up my sister used to keep strange pickled things in her bedroom and I don’t mean onions.  She had a bat, fish eyeballs, a chicken’s foot – all to satisfy her interest in Biology.  Once we were on holiday, driving slowly along a quiet country road in Dorset, when my mum spotted something unusual just up ahead, motionless on the tarmac but looking like a snake.  Indeed, it was a large grass snake.  Dead, but perfectly preserved (no tyre marks).

It’s only on recapping this story that I realise it may seem bizarre that we stopped , picked it up off the road and drove on with it in the car.  Then my mum and sister spent the next day traipsing round chemist shops in the Lyme Regis area in pursuit of formaldehyde.  And they got some.  So then we kept a  dead grass snake pickled in a jam jar of formaldehyde in the hotel room for the rest of the holiday (before it was given permanent residency on my sister's grim specimen shelf).

But I digress; the disembodied foot is still out there in the garden and I suspect it may have belonged to Limpy, who was a regular woodpigeon visitor, recognisable by (as you probably guessed) a limp.  Just now another woodpigeon has been sitting on the roof for an awfully long time, cooing and calling, probably for its mate, and no-one turned up.

However, the sparrowhawk has feasted well.  It can’t be an easy life for this magnificent bird of prey, having to catch other birds on the wing – eating little else – this is a committed carnivore.  The female can survive for seven days without food apparently so hopefully a belly full of woodpigeon will keep her hunger at bay for another week.  If not she can always come back for the foot.