Distraction (Playing along with the art school boys - part four)

I've been struggling with knowing how to pitch blog posts and words in general at the moment.  I've decided for me at least distraction is beneficial, a way of keeping things as 'normal' as possible, and I really hope this doesn't appear flippant or insensitive. It's just one way of coping and trying to offset the deluge of intense anxiety and very real issues and uncertainties that dominate and affect all our lives right now.  I don't want to go there in my blog as well and  to continue writing about unconnected things in a familiar way is a form of expression/outlet which helps keep me grounded; a stable, trivial place away from the rest.  But I'm aware this may not be the same for everyone, so I do hope anyone coming here will understand. 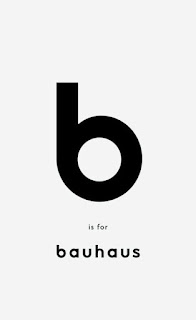 As I sloshed shiny brown paint onto an over-sized sausage formed from lumps of foam wrapped in paper, I had no idea about Bauhaus.  I don’t mean the band –  although they were soon to lure me into torn black lace dresses – I mean the art movement.  But I realise now that one of the very first projects we were given on my Foundation Art course was directly influenced by it.  The original Bauhaus Art School founder, Walter Gropius, was keen to encourage problem-solving and experimentation in different media, and 60 years later my college tutor Stella did the same.  It was a basic introduction to the study of elementary form, materials, colour and craftsmanship.

The resulting artwork, a collaborative effort, was a giant hot-dog, around 4 feet long, made with discarded objects and materials unearthed from studio rubbish bins and the like.  I can’t remember now if the things we found inspired the idea of a hot-dog, or if we were inspired by someone’s lunch.  It doesn’t matter – in true Bauhaus style we experimented with materials, solved construction problems and  thus transformed foam and paper, Copydex  and paint into a supersized weenie, complete with plastic Ketchup and woodchip sesame seeds.

Ah, such carefree, creative days and yet did I truly appreciate them?  I don’t think I did.

So when I see art students now I get that whole feeling  back, but wish I could do it all again and not be so overwhelmed by all the silly things that most 17-year olds are overwhelmed by (or were then!).   Seeing fresh-faced art students, so often deep-thinking, slightly misfit kids with a taste for strangely matched clothes, gives me a genuine lift.  I think it's because it reminds me of all those opportunities to explore and experiment, to learn and be playful, in a field which really, when you think about it, is something of an indulgence.    However, perhaps given the situation we find ourselves in at the moment, we might appreciate the undemanding pleasure of  some art for art’s sake more than ever.

This is exactly what I felt the other night on watching the recent TV documentary about the Bauhaus School on BBC Four ('Bauhaus Rules', still available on iPlayer here  - interesting soundtrack too).   The delightful Jim Moir aka Vic Reeves took us to Central Saint Martins  where we met some young graduates who would spend a week working on various projects subject to the ‘rules’ inspired by the original Bauhaus artists who taught it.  From strange breathing exercises to a themed costume party and much in between it's a crash course I would happily sign up to now if it existed..  Oh, I wanted to be back in Stella's Foundation Art class, just starting out, feeling as if we're pushing boundaries (from the safe haven of an educational institution!), wide-eyed and curious (and sometimes a little defiant).  We oscillated between the opposing states of either taking oneself far too seriously or having ridiculous, unbridled fun, between being a quiet introvert on the one hand and having a distinct taste for the outrageous on the other.

Anyway, in the programme, the students are set projects by established creatives from different disciplines who have all been inspired by the Bauhaus design principles.  One of these is Neville Brody and I was reminded just how much I love his graphic style and typography, with which many of us of a certain age are so familiar, thanks to his work in ‘The Face’ magazine. 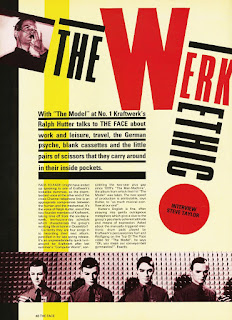 Once you become aware of a certain Bauhaus style, you see it all around too, from chair designs to clocks to album cover artwork.

If you have some extra time on your hands and you’re into art, or perhaps anything a little left field (and/or Jim/Vic) I recommend losing yourself in this programme and the joy of art student thinking for a short while.  And even if not, maybe now is the time to abandon our genuine worries for a brief moment, turn to some easy escapism and playtime from the safety of our own homes, and set ourselves the task of making something creative and unexpected.