I’ve just been granted exclusive permission to publish a photo of someone whose name has appeared here several times over the years... 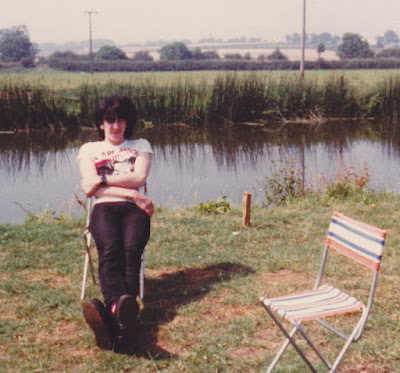 Here he is in 1981.  A bloke in creepers and a 'We Are All Prostitutes' T-shirt sitting on a folding chair by a river may not be as extreme as teenage goths grimacing on the beach in those ‘Embarrassing Family Photos’ websites, but still I love the way it looks a little out of place. I snapped him squinting in the Summer sun as the morning light bounced off his fluorescent pink socks, androgynous post-punk hair blowing in the breeze against a pastoral backdrop in the middle of nowhere.  (The middle of Northamptonshire, as it happens.)

That’s how it was, though, wasn’t it?  Holidays, weddings, funerals, etc. were difficult when it came to dressing ‘appropriately’.  We wanted to wear what we always wore and (of course) what we wanted to be seen in.  Which was at least appropriate to who we were and what we were into, as deck shoes and shorts had never been in our wardrobes. 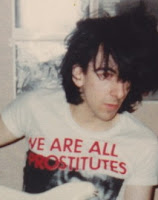 A slightly better view of that T-shirt

The Pop Group: We Are All Prostitutes

I took that photo the first time we went away together.  We didn’t have much money, still lived at home with respective parents, but for a nominal donation we were able to borrow a little narrowboat for a couple of days from my mum's friend.  It was moored at a campsite in a place we’d never heard of called Thrapston.

The saffron yellow, bone-rattling, ex-Post Office Viva van got us there somehow.  Mr SDS had only just passed his driving test and I couldn't drive at all; I tried to read the map the right way up while he did his best not to show his inner panic.  We made it unscathed through Bedford anyway, which was quite a triumph.

Smells make memories, don’t they?  And if I ever smell that disctinctive whiff of paraffin now I find myself right back on that boat, sitting on the foam-cushioned bench seats (which disappointingly only converted into single beds with several feet between them) eating Heinz Sandwich Spread on Crackerbreads.   Weird, but I really remember that detail.  Sandwich Spread may have the colour, taste and consistency of sick, yet in 1981 eating food not bought by our parents in unfamiliar waterborne surroundings with my boyfriend was so exciting that I managed to keep it down.

More exciting, though, was just listening to the radio there. We heard a lot of chart singles such as  Kim Wilde 'Water On Glass', The Specials 'Ghost Town' and Tenpole Tudor 'Wunderbar'... they are the sound of that place to me still, the sonic equivalent to the smell of paraffin.

Let me take you back to a 1981 Top Of The Pops for a moment as a reminder:

Then we listened to Richard Skinner’s evening show which usually featured a band in session.  That night will forever be associated with Soft Cell:

I remember thinking the last song 'Youth' was really something.

(People used to think Mr SDS looked a bit like Marc Almond; he was once offered a freebie jar of Dippity-Do hair gel by an older stall holder at Camden Market on the strength of it.)


It was when we wanted to go to bed that the spiders appeared.  Dozens of them. Every corner, every crevice, the low lamplight casting monstrous 8-legged shadows against the wooden panels.  Big fat juicy ones and long-legged spindly ones, stripey ones, ones with bodies that looked like baked beans and hairy varieties too.   It seemed to take forever to carefully flick each one out the window with a Queen's Silver Jubilee themed tea towel.  Thanks to that I conquered my fear of spiders, so much so that long-time readers will know I now actively love them.  But that doesn’t mean I ever want to sleep with them.

You must've heard the apocryphal tale that goes round schools about the couple who get lost on a nighttime drive in the wilderness?  – where the boyfriend gets out to seek help and later the lone girlfriend hears banging on the car roof, which to her horror turns out to be his decapitated head in the hands of an axe murderer.   It came to mind when I was awoken in the early hours that first morning by the mysterious, repetitive knocking on the narrowboat roof.  It sounded very close, very persistent.  Luckily Mr SDS’ head was still intact on the starboard bunk.

What was that noise? 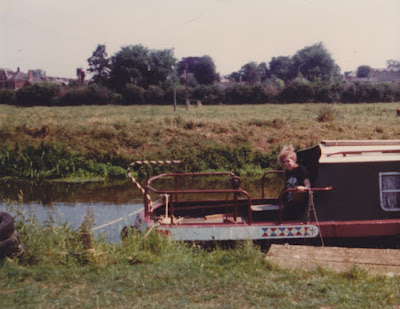 Later we wandered out of the campsite and into a time-warp: a grocery store in town, where a plump, rosy-cheeked lady sold us a bottle of Dandelion & Burdock. She was so friendly; I like to think she approved of Siouxsie’s lifesize face staring out from Mr SDS’ chest and my sleeveless Lurex top sparkling in the dusty rays of sunlight.

Strolling back to our moorings, every wooden gate we passed – and there were quite a few - came with a bony old man in a tweed cap attached to it.  Maybe it was the same man, skipping ahead unseen behind the hedges while we dawdled, just to mess with our townie minds.

It's funny how I remember all these odd snippets.  I can never see a man leaning on a gate now without thinking of everything I've described above.

Did we untie the mooring lines when we got back, fire up the boat's engine and go chugging up the Grand Union Canal with our new-found freedom?  Course not!  There'd have been no turning back. 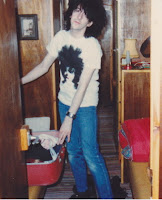