Behind the wall of sleep

If I ever win something on the Lottery (unlikely, I don’t do it), or come into some inheritance (unlikely, no-one still around with anything to leave), or you're a generous philanthropist reading this now (lovely to meet you!) – there's something, not too out-of-this-world, I'd just like to do.

It's fairly modest: a kind of art project - travelling around Europe photographing windows.  Not any old windows, though; I know what I’m looking for - ones that, soon as I notice them, have a strange, déjà-vu effect, as if I’ve been on the inside of them, looking out.  I’ll be out of harm’s way, in the open air, but I’ll know that, on the other side of their small, dirty panes, up high and out of reach (always up high), all manner of unspoken danger and supernatural wickedness lurks.  I'll know because I’ve been behind these windows many times, in dreams.

The recurring theme (probably a common one?) is that I’m wandering through a building – often an old house with paneled walls and narrow staircases, like you see in creepy 1940s films, but sometimes they're industrial or 1970s office blocks – and I go higher and higher.  Everything's fine until I step into the very top room or space with that window, and then I feel ‘the malevolent presence’.   Sometimes I'm trapped, peering out at a normal world I can't get to.  I never see the source of my fear, just sense something very sinister in the room.  I'm sure a psychoanalyst would have an explanation.  I might not want to hear it, mind.

Anyway, maybe I'd overcome these disturbing dreams by capturing the physical image of the windows themselves? It would be great just to have enough freedom and funds to go travelling with a cool high-tech camera (once I've learned how to use it)  and then I could click away to my heart's content (in between eating linguine in Tuscany and visiting the Louvre in Paris. Perks of the job).  Let me know if you fancy doing the driving.

I s'pose that's what dreams are for, the daydreams anyway... that's where things start, tho' in this case it started with nightmares.

I'm unlikely to have time/money to fully indulge in something pointless like this, though. Who does?  It's a shame, isn't it -  all the things we might do if only we could just suspend normal life for long enough and take off with no other concerns.  Not major life changes or ambitions, just 'projects' - things that really are possible, but need a bit more than you have.

Meanwhile then, I took a short stroll locally (before I sprained my ankle!) and found a few high windows, the best I could do with limited time, anyway.  Here are just three crappy, furtive pics to try and show what I mean.  (I had to tell the owner of one that I was photographing a bird on his roof as I didn’t want to let him in on the unspeakable paranormal malevolence in his attic.)

Are they a bit creepy, or is it just me?  I mean, just imagine yourself, trapped behind them, where no-one can hear you scream.... 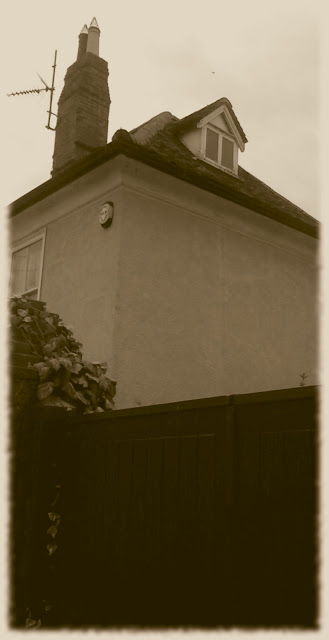 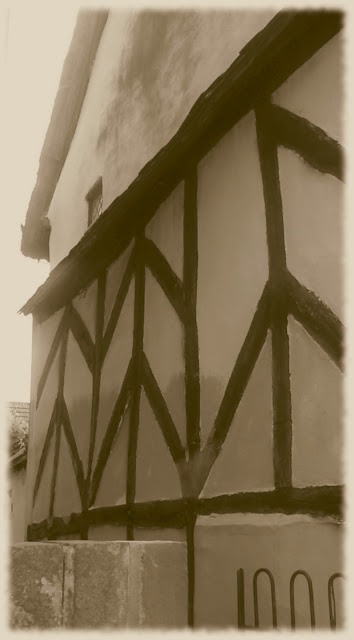 The tiny ancient window up there on the left
offers no escape from the terrifying ghosts within
Posted by C at 22:41