I didn't snog Chris Difford, nor take my top off in front of the cameras, but for years – decades, in fact – you could be forgiven for thinking I had. Those festive pop video shows filled me with a disproportionate sense of dread. I could take any amount of the perennial Slade, Mud and Wizzard clips as long as they never, ever showed 'Christmas Day' by Squeeze.

It's December 1979 and I'm sixteen, self-consciously punky and down in London skiving with three of my male college mates. We spend most of the day in the Kings Road. It's a really damp, foggy day and the once vertical spikes of my peroxide-white hair have gone all floppy. That's the kind of thing that really mattered then, as I'm sure you understand.

We end up at Seditionaries admiring and Viv's behind the counter; we're a little in awe of her. I seem to remember she treated us rather condescendingly and I don't blame her one bit.  But she tells us that some video people are looking for extras to appear in a shoot they're doing at the Molinare Studios in Soho. It'll be good, take a trip down there, she suggests. She's very persuasive, and we're a little drunk. And my hair is all floppy, grrr.

That's how I end up doing the fucking conga in a room full of strangers while free drink in paper cups is handed out along with party hats and Squeeze mime to their terrible Christmas single over and over again. All I remember is knocking back the warm lager and thinking it was really, really uncool to be dancing the conga.  And seeing a woman there with massive tits.

Oh... and that my hair had gone all floppy.  I hated it when my hair went all floppy.  Have I mentioned that before?

Once sober the sheer horror of it all kicked in. I hoped the single would fail miserably and the video would never be shown on Top Of The Pops. I carried this weight around with me for years. Having told Mr SDS about it he could never work out quite why I was so reticent, so embarrassed - why I cringed at the merest thought that one day it might get aired. I think he was convinced that I had snogged Chris Difford or taken my top off in front of the cameras. I started to think I had done so myself, perhaps even both at the same time.

All these years on, YouTube has entered our lives and everything is out there. I might as well get this over with once and for all.  Deep breaths.

The single and the video are awful; no wonder it never charted. But of course I have to watch the whole dire thing through, in case. Self-conscious teenagers, so obviously pulled in off the streets, dance around like idiots; I see a glimpse of white-blonde hair.... nah that's not me. Oh, there's that woman with the tits! Then the conga... oh, the conga... and, you know, I reckon it fades out at the exact moment I was about to come into view. 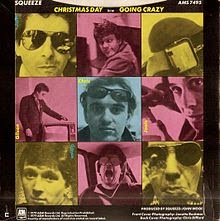